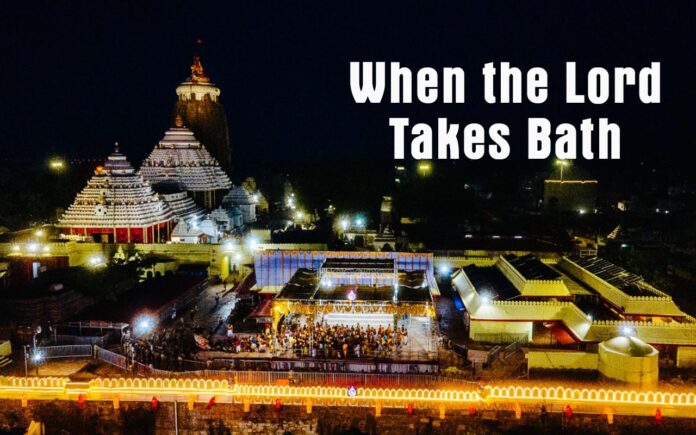 Today is the full moon day of the bright summer known as the Jyestha Purnima. On this holy day, Sri Jagannatha emerges from the Rathna Singhasana with his brother Lord Balabhadra, sister Subhadra, and allies Lord Sudarshana, Sridevi, Bhudevi, and Madana Mohana to take a direct bath, called the holy Snana Yatra. Devotees are curious to see the event as the wooden lord gets a direct water bath once a year and it’s observed in front of his followers. You may ask what happened on the other two days. The answer is that the idols get bathed in a mirror and with Vedic mantras called the Mantra Snana.

Before the sun rises from the golden horizon and offers his first shine on his invisible feet, the Lord makes himself ready on the Mandapa. The servitors follow long-prevailing Vedic rituals to observe this holy event in high discipline and observe Snana yatra from years.

It is believed that when the God takes bath, the world men and gods come to witness the event.

The foremost event of the day to mention is the “Pahandi Bije.” During this ritual, the Lord steps down from his chair, or the Rathna Singhasana, and comes to the Snana Mandap, or the bath place. It is located inside the temple premises, and pilgrims can see this entire event from outside. As per schedule, this has been observed by the concerned servitors before 4.30 in the morning. It takes around 4 hours to complete the ritual.

After the Lord arrives at the beautifully decorated Snana Mandapa or Snana Vedi, the concerned Garabadu Servitors bring 108 pots of water from a designated well inside the temple known as the Suna Kua, or the Golden Well. It is one of the ancient wells and was made by King Ananga Bhimadev in the 13th century. The ASI report says that during this time, to meet the water requirements of Puri town, 41 wells were dug by the King.

Once a year, this golden well opens to serve God. It is one of the 7 wells inside the temple premises and is specially designated for Snana Jatra. It is kept under lock and key except for this day.

108 pots of water poured on the Lord for Snana

First, the servitors take water as needed to the Bhoga Mandap in 108 pots. Then, the water is blended with 22 fragrance elements like sandalwood, turmeric, Agur, etc., and the pots are covered with cloth and brought to the Sanan mandap. When required according to the ritual, 35 pots from these 108 pots are poured on the Sri Jagannatha idol, 32 on Sri Balabhadra, 22 on Devi Subhadra, and 18 on the Sri Sudarshana idol. Devotees and pilgrims are mesmerised by seeing the divine event of Snana Jatra and run to get the holy bath water.

The elephant-like adornment after the holy Snana

After the bath, the idols are decorated with traditional ornaments, and the faces look like an elephant or Lord Sri Ganesha. So this is also famous as the Ganapatya adornment in public. It is believed to have begun during the rule of the Marathas in Puri and was offered by the great saint Ganapatya Bhat.

Generally, this is observed in the afternoon, and the devotees are allowed to catch a glimpse of this adornment on the mandap then.

After this Snana Yatra, it is believed that the god fell ill and they remained quarantined for 15 days. No devotees, even servitors (except the designated), are allowed during this time. This is called the Anasara period. Some believe that this is the preparation time for Rathyatra.